The Snowden-Gray House and Heritage Museum of Kappa Kappa Gamma in Columbus, Ohio, is dedicated to educating members and the public about the changing societal role of women in higher education, perpetuating the heritage of Kappa Kappa Gamma Fraternity, and preserving the architectural integrity of the 1852 Italianate home.

The home was built in 1852–1854 by Philip T. Snowden and his wife Abigail. He, a successful dry goods merchant and she, a successful milliner (hat-maker). From 1862–1864 it was the home of Civil War Governor David Tod. From the end of the Civil War until 1922, the family of Columbus philanthropist David S. Gray occupied the residence. Since 1922 it has served a variety of uses, including the headquarters of the Columbus Women’s Club. Between 1950 and 1951 Kappa Kappa Gamma Fraternity acquired the house as its national headquarters. After the house sustained extensive damage from fire in 1965, Kappa Kappa Gamma rebuilt and strengthened the organization's commitment to the Town-Franklin neighborhood and to historic preservation. In 1981 the original downstairs rooms were restored to their 19th century style. Period furnishings and artifacts depict daily life and culture in the Victorian era with an emphasis on the lives and roles of women. 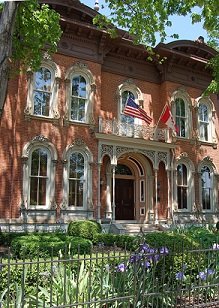 Open for walk-in tours on Wednesdays and Thursdays from 1:00p.m. — 4:00p.m.; other times by appointment