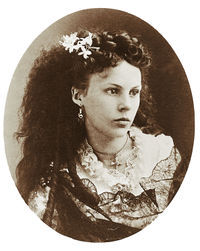 Family: Born September 23, 1854, in Peoria, Ill. Daughter of a wealthy family, originally from Tarkio, Mo.: Joseph Stevenson and Mary Jane Patton; home at 120 North C St. in Monmouth is still standing. There is some question about Lou's year of birth. Lou provided a hand-written biography claiming that she was born on September 23, 1855. In an oral interview for The History of Kappa Kappa Gamma (Whiting-Westermann, 1932) Lou divulged that she was born in 1854. Her obituary states that she was 83 years old at the time of her death in 1937 – which would have made her birth year 1854. And unfortunately, Peoria, Illinois, has no birth records before 1877.

Kappa Record: Officially listed as Alpha 6, the sixth member added to the original group at Kappa’s first formal initiation that took place at Sue Walker’s home with Minnie Stewart presiding (April 1, 1870). First Alpha business meeting to discuss the badge and select a jeweler was held in Lou Stevenson’s home. She did not sign the charter because she had lost her galoshes and it was a rainy night. First Alpha social (“real party”) took place in her home on Halloween 1872. The parlor had folding doors that could be closed to safeguard the secrets. She attended three Kappa Conventions (1930, 1932, 1936) and the reinstallation of Alpha in 1934. She was actively involved in Fraternity research about Alpha. She was a member of Kansas City Alumnae Association, which gave her a ruby and diamond badge that had belonged to Bertha Starr McIntire, a founder of Omega Chapter, Kansas.

She gave the Fraternity the furniture used in her home for the first formal Kappa Kappa Gamma meeting 1870, including the table on which the first minutes were written, the chair in which First Scribe Jennie Boyd sat, and the chair's matching sofa. The sofa and chair are on exhibit in the Morning Room and the table is in the Grand Parlor at the Fraternity’s Heritage Museum in Columbus, Ohio. She also furnished one bedroom and much of the dining room at the Boyd Hearthstone in 1938. Her autograph book is the only document from the early Alpha Chapter years. It lists the first member dismissed from Kappa Kappa Gamma, initiated with Lou on April 1, 1870, and dismissed shortly thereafter.

Personal Data: Married William Oliver Miller in 1874. Her husband was a member of Phi Delta Theta and a founder of Tarkio College, Mo. They had three sons and one daughter. Niece Annabelle Stevenson McClanahan and Cousin Louise M. Patton were initiated as alumnae by Alpha Deuteron in 1934. Granddaughter Sarah Johnson was initiated at Theta Chapter in 1954. Lou died on December 3, 1937, in Kansas City, Mo., and is buried in Tarkio, Mo.

According to Lou, Minnie Stewart and Sue Walker had the first idea for a women’s fraternity in Summer 1869. These two then asked Lou Bennett and Jennie Boyd to join them and in turn, they asked Anna Willits to join.

Lou’s letters and autograph book differ from the recollections of other Founders. Still, her autograph book, Album of Memory, is the only written document of and from the early Alpha Chapter’s years. It contains on the inside back cover a listing of the first members of Alpha. It is now on loan from Alpha Deuteron Chapter to The Stewart House, where it is on exhibit.