Difference between revisions of "Leadership" 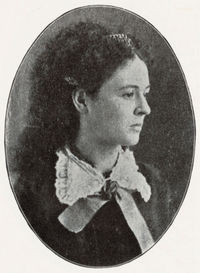 Tade Hartsuff is a persona familiar to those who have visited Fraternity Headquarters, for her life-sized, full-length aquarelle portrait hangs in the mail hall, revealing a woman of stately beauty, with warmth in her smile.

At the 1881 Convention, years before the portrait was painted, Tade Hartsuff was an eager, vivacious, black-eyed collegian, her dark curly hair pulled into long ringlets that fell down her back. Changing the Fraternity’s Bylaws to a Grand Council form of government wasn’t the only revolutionary idea Tade put forth as Mu delegate in 1881. The first business recorded in the Convention minutes concerns the founding of a Fraternity publication, a proposal that originated with a committee Tade chaired. In adopting the idea, Kappa Kappa Gamma became the first women’s fraternity to publish a magazine. As Minnetta Taylor, DePauw, wrote of the 1881 Convention in the first issue of The Golden Key, “Miss Hartsuff and I found a common sympathy. She was a red-hot radical, or rather improver, and I was a white-hot one. We both believed with all our hearts and minds and souls in the new woman and her future.”

It is a testament to Tade Hartsuff’s intelligence and leadership that she guided the Fraternity in implementing a new form of government as its first Grand President while simultaneously serving as Mu Chapter President and carrying on her work as a student in her senior year. After graduation, she became the first woman in Western Pennsylvania admitted to law school and became engaged to John Bugher Kuhns, a member of Phi Delta Theta, the men’s fraternity that had given her the idea for a Grand Council.

Tade served as Grand President from 1881-1884, during which time eleven new chapters were formed. It is said that parliamentary law and the drawing up of constitutions were a simple matter to Tade Hartsuff.

Two years after graduation, in 1886, Tade married John Kuhns and settled in Pennsylvania. When part of her state became flooded three years later, she plunged into relief efforts for victims, soliciting contributions from as far away as Texas and Montana. That same year, throat pain threatened her with deafness, and on a doctor’s advice, she and Kuhns moved to California for 18 months. That journey instilled in Tade a life-long love of travel.

When her husband died a year later, Tade continued to travel in earnest, and in 1930 she was described by the New York Sun as one of the most widely-traveled women of the world. She journeyed seven times to Japan, traveled 3,000 miles up the Nile and the length of Africa, lived in the Vale of Kashmir, and visited both Persia (now Iran) and Siam (now Thailand). She attended the funerals of kings and emperors, Edward VII’s coronation and the Paris Exposition; she heard Sun Yat Sen speak on the first anniversary of the Republic of China.

When she could, she attended Conventions, sharing her adventures with her Kappa sisters. She urged internationalism at the Golden Jubilee Convention in 1920 (at which she also presented the Fraternity with the full-length portrait). Deafness, however, kept her from enjoying all of the lighthearted intimacies and subtleties of Convention friendships.

In November 1932, the first copy of The History of Kappa Kappa Gamma Fraternity, 1870-1930, was given by author May C. Whiting Westermann, Nebraska, to Tade who bequeathed it to the Fraternity archives. By 1936, she was not only deaf but unable to use her eyes for more than an hour a day. In 1937, the year she died, Kappa established its first foreign exchange program in her honor.

Tade Hartsuff Kuhns is remembered as a woman of unprecedented independence who was also friendly, generous and tactful, with a pervasive sense of humor. She is also remembered for her enthusiasm, not only about Kappa but for women and their place in the world.

During her last term as Grand President, it was written in The Golden Key that, “The character of a fraternity is to some extent determined by the quality of its individual members, but its success as an organization depends upon their united efforts for the attainment of its aim and object… . Both as chapters and as individual members of the Fraternity, we are directly responsible for the name and reputation of our order.”

The strength of Kappa Kappa Gamma can be traced to the vivacious leadership and foresight of Tade Hartsuff Kuhns, a woman whose life is an inspiration not only for Kappas but for all women.