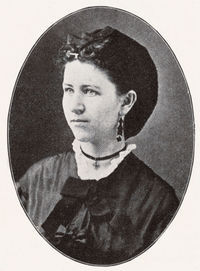 Kappa Record: Oldest Founder (age 20); one of the four organizers in late 1869. She is listed as Alpha 2 and signed the charter in the Spring 1870. She was the first Alpha Scribe in 1870 and presided over the first Alpha business meeting, which made the badge orders in the Spring 1870. She was the first Grand Secretary of Kappa Kappa Gamma in 1871. She is credited with selecting the colors, blue and blue, and the statement: “How rich we are in daughters.”

Personal Data: Described as the “balance wheel” of the group with “executive ability…a keen and analytical mind” and considered a major force in the early planning of Alpha. Her brother, Rev. Joseph Newton Boyd, married Founder Lou Bennett. Jennie never married. Two nieces, Helen Boyd Whiteman and Katherine Boyd Graham, were initiated as alumnae by Alpha Deuteron in 1934 when Alpha Chapter was reinstated. The event was attended by her sister-in-law, Founder Lou Bennett Boyd. Jennie died in September 26, 1937, in Jacksonville, Fla. She is buried next to Lou Bennett Boyd in Hickory Grove Cemetery, Green Cove Springs, Fla.

Note: Lou Bennett maintained that Minnie Stewart, first president of Alpha Chapter, did not make the trip to Bloomington, Ind., to found Delta Chapter and that only Jennie Boyd as Scribe went. The Fraternity history states that a group of young women at Indiana University petitioned Alpha in the Fall 1872. All arrangements for the initiation were made by correspondence, but the first business meeting of Delta did not take place until January 2, 1873, which is the first date in the Delta Red Book. As the first Kappa Kappa Gamma secretary, it is probable that Jennie Boyd was the one in contact with the Founders of Delta Chapter and it is possible that she did visit sometime that year. There are no records of the Fraternity before January 1873 (Delta Red Book). Delta tradition maintains that no member of Alpha came for the initiation, but there is no statement to the effect that no member of Alpha visited during the formative fall months 1872.

Lou Bennett’s recollection of Jennie Boyd’s visit refers to Delta as the second chapter. At the time of her remarks, the original Beta and Gamma Chapters no longer existed. It is interesting how Lou’s mind continued to view extension from the perspective of 1870, that is, by chapters that were still in existence. Therefore, in this early Alpha view, Delta, Indiana, is the second chapter.

Lou Bennett and Minnie Stewart went to found Beta. Gamma was founded by an initiated member of Alpha, Minnie Kendall, initiated November 16, 1871, who then transferred to Smithson College (Logansport, Ind.). It is logical that a member of Alpha went to Bloomington, Ind., at some point and it was probably Jennie Boyd. Epsilon, Illinois Wesleyan, the fifth chapter, was founded by Millie Clark, pledged for the sole purpose of founding Epsilon. Fraternity extension always took the form of personal contact.

Additional biographical information about Jennie Boyd in The Key